Address to delegates at the IMEC Conference on 8 April 2022

Dr Fedir Androshchuk is a Ukrainian archaeologist, a graduate of the Department of Archaeology and Museology of the University of Kyiv. He is an internationally recognised expert in his specialist field: the connections between Byzantium, Old Rus and Scandinavia during the Viking Age. He worked for over twenty-five years in universities and museums in Ukraine and Sweden before his appointment as Director of Ukraine’s National Museum in 2021.

I contacted him last month to enquire about the threat to Ukraine’s museums and cultural heritage following the Russian invasion of 24 February and to ask how colleagues in Ireland might be able to help. I made him aware of this conference and he has asked me to share his experiences in the form of the following statement.

I would like to thank the conference organisers, Dominic Bryan, Emma Reisz, and Briony Widdis, and Lynn Scarff, Director of the National Museum of Ireland, for generously arranging a slot to enable this to be done.

The conference theme on Museums, Empire and Colonialism resonates particularly with current events in Ukraine. His first-hand testimony is powerful and as I read this, I would like you to imagine how you might react if faced with a similar situation.

I am certain Dr Androshchuk and his colleagues will appreciate your support in their endeavours to secure and safeguard the cultural heritage of Ukraine. 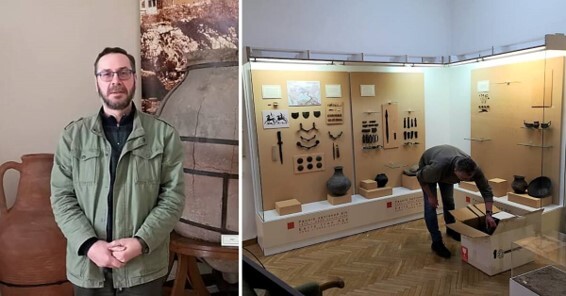 As I write it has been ten days since Russia invaded Ukraine. I would like to share some experiences and observations I have made about the impact of this event on my work and duty as director-general for the National Museum of the History of Ukraine.

First, don’t expect any clear instruction or guidance from your chiefs. Things happen much faster than they are able to deliver a decision. On the eve of the war, very few regular people, as well as politicians, believed that war would actually happen. Panic is the worst thing at this time: that is why any signals of worry from museum directors could be ignored by the Ministry of Culture. Even if there is an elaborate plan showing how museums should act during military conflicts, there are a lot of practical obstacles that make its implementation unrealistic.

The Russian attack on Ukraine was launched about 5 o’clock in the morning. I was awakened by a colleague telling me that Zhulyany and Boryspil city airports were being bombed. How many of my museum colleagues were expecting to see this day? Many have families, parents, kids, pets. They are all terrified of the sounds of sirens, shells and the roar of aircraft. Even those who are obliged to be there (administration, the chief-keeper), can’t be available because of logistic and/or communication problems, or because they are simply afraid. So, in such circumstances, the only staff you can rely on is devoted people. We don’t find “devotion” listed in job specifications: it can be revealed only in unexpected emergencies like this. Now, it is difficult to believe but on that grey morning, I found at the museum about 20 devoted people – collection keepers, technical workers, carpenters, guides, researchers, librarians and law experts. They all contributed to disassembling exhibitions and packing exhibits.

The experience of the Second World War shows that looting and aircraft strikes are typical dangers museums can face. Evacuation can make sense if you have at least a couple of weeks before military operations are activated in your area. The ideal solution is the evacuation of exhibits by air. Evacuation by trains has its bad sides – the railway can be demolished; the train can be damaged by bombs or rockets from the air. Facing the eventual occupation of the city, the Ministry of Culture (if it is still active and not on the move) or museum administration needs to make a decision about the collection and exhibits on display. If you are certain that the army of occupants will respect the international law of protecting heritage, you may skip the dismantling of exhibitions. However, this is not the Ukrainian case.

During the time of the Russian Empire and the Soviet Union, many archaeological, numismatic and other objects of Ukrainian culture were moved to Russia and found their place in the showcases of such Russian museums as the Hermitage and the State Historical Museum. There is no guarantee that in line with Putin’s denial of Ukrainian statehood and identity, Ukrainian cultural heritage will not be a subject of mass robbery. So, I have made a decision to remove and hide all exhibits. If you have a large collection and very limited time, it is necessary to establish an order of priority.

In 1970 in the Soviet Union, “Instruction concerning the protection of museum and artworks from the means of mass damage” was issued. It is still pretty much in use in most post-Soviet countries. According to it, objects should be classified into two categories. The first comprises items of national and world importance, unique relics as well as rare objects of the natural history of great importance in terms of the history of science. The second group includes similar categories of objects which have primarily national significance. Both groups have special distinguishing marks that enable easy location in showcases and museum stores.

Timely evacuation or placing of exhibits in specially prepared underground stores are recommended for objects of the first group. Items in the second group need to be evacuated after the security of the first group is completed. The selection of both groups needs to be undertaken by competent teams of experts. They compile a list of objects of both groups specifying their number, size, weight and volume, and finally orientation for the planning of packing materials and transport. Irremovable objects should be listed in a special catalogue and need to be protected on the spot. This is basically the main principle according to which we have undertaken work in our museum.

Once all exhibits have been removed and hidden, the museum turns into huge storage. Its public work is limited to online activity. This means you need to have a good competent team of writers able to deliver good quality texts adapted to a wide public, focusing on museum items. People can’t visit the museum, but they are still interested in watching and interpreting the museum’s objects.

Such conscious destruction of the exhibitions is a preventive measure to keep the museum collections safe from possible looting. At the same time, this dramatic moment can be considered as a crucial point for the beginning of a new museum. It is a time for rethinking the narrative of previous exhibitions and considering possible new roles for the museum.

- Dr Fedir Androshchuk, Director of the National Museum of the History of Ukraine, Kyiv.

In a postscript sent on March 31 last, Dr. Androshchuk adds:

Today the situation changed slightly. There is much help from different institutions and private individuals from around the world. With the help of the Nordic Museum in Stockholm, we have created a special fund to help Ukrainian museums and save cultural heritage. However, the life of Ukrainian museums is still far from normal. Many museums situated on the left bank of the Dnieper river (Chernihiv), border areas with Russia (Sumy, Harkiv, Mariupol) and/or in the zone of the war activities have significant problems with electricity, heating and water supply. There are some cases of damage of historical buildings recorded. The status of some collections and museum staff is unknown. In spite of what happens today, I think it is important to think about the post-war future of the museums and collect financial help to bring their life back.