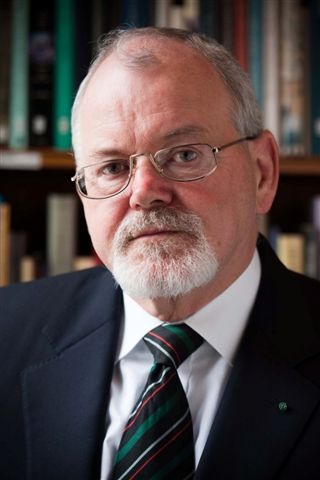 Dr Michael Ryan, archaeologist and the former Director of the Chester Beatty Library, delivered the 2012 annual lecture under the title 'Command and Control? Managing in the National Cultural Institutions'.

It was held with the support of the National Library of Ireland, Kildare Street, Dublin 2, on Wednesday 7 November 2012.

“As the fiscal crisis works its way through the public service, museums, it seems, can look forward to the re-emergence of older patterns of management if not of actual ‘command and control’. Ireland has always been a very centralised country and arguably did not expand its effective capacities in the past generation to cope with and manage access to wealth. Museums, despite being at the tail end of consideration in the public realm, were adequately resourced for the first time and were being managed in a more modern fashion just as the economic tide began to ebb.

The new situation is perfect for the reassertion of models of governance along lines essentially unchanged since the later nineteenth century just as capacities in government and in cultural institutions are contracting. Governance in cultural institutions has not been particularly well-developed in Ireland and there has been considerable confusion about roles and a lack of training for potential governors. For some institutions, arms-length governance structures are in their infancy and if benefits are to come from new structures, they need to be nurtured and supported. However, there is evidence that there is a widespread retreat in Ireland from approaches which provide autonomous advice and governance and cultural institutions will not be immune.”

Dr Michael Ryan is an archaeologist and the former Director of the Chester Beatty Library.

He is a former President of the Royal Irish Academy, Chairman of the Discovery Programme, Vice-Chair of the Board of Governors and Guardians of the National Gallery of Ireland and Chair of the Irish Association of Professional Archaeologists. Dr Ryan has served on several public and private bodies dealing with conservation of the heritage in Ireland (north & south) and with promoting research in the humanities and social sciences. He was a member of the Executive Committee of ASEMUS, the Asia-Europe Foundation museum network, and is the current Chair of ICOM-Ireland. He is Honorary Professor of Art History and Honorary Fellow at Trinity College, Dublin and Frend Medallist of the Society of Antiquaries of London (1990).

Formerly Keeper of Irish Antiquities in the National Museum of Ireland, he is the author of numerous research articles and monographs and editor of several books on archaeological topics. His research interests include early-medieval art and archaeology, ancient metalwork, landscape history and early prehistory in Ireland. He is co-author with Frank Mitchell of Reading the Irish Landscape. His collected essays Studies in Medieval Irish Metalwork were published in 2002 by Pindar Press.

His Museum work has included the negotiating and mounting of exhibitions in Ireland, Britain, continental Europe, the United States and Australia and representative duties in a number of Asian countries. He was recently appointed Officer in the Order of Arts and Letters of France and Adjunct Professor of Archaeology in University College, Dublin. He served as Master-Warden of the Company of Goldsmiths of Dublin 2008 – 2009.